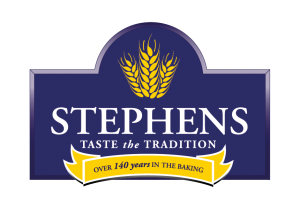 The award winning Dunfermline company of Stephens the Bakers Stephens has kindly supported a variety of ‘Old Dunfermline’ shows at the Carnegie Hall in Dunfermline over the years, as well as the latest in the series of ever popular ‘Old Dunfermline’ DVD’s that came out in 2014. Their ongoing support is greatly appreciated and enables the history and heritage of Dunfermline to reach out to a wider audience. Their support of the ‘Old Dunfermline’ website is an example of the positive role the company plays in the community in which they have been based for over 140 years.

Their founder, William Stephen, who had been sacked for leading a bakers strike in Dunfermline, chose the front page of the Dunfermline Press in 1873 to announce his new business venture with the following advert:

“Opening of Baking Premises – William Stephen begs to intimate that he has commenced the Baking Business in that shop in Gibb Street, lately occupied by Mr James Lamond, and trusts by keeping bread, etc., only of the best quality to merit a share of public support.”

He set up his bakery virtually opposite the cottage where Andrew Carnegie was born, in the shadow of the Abbey, right on the route where the Kings Couriers and Abbot’s messengers from Rome would have passed on their journeys to Dunfermline Palace. As the bakery expanded over the years, one of the men William Stephen later employed was Tam Stenhouse, the Foreman who had sacked him for being a strike leader.

Sharing the year of their founding with the Scottish Football Association, the present company are very much aware of their place in Dunfermline’s history and community, and have kept up a footballing connection by supplying their award winning steak bridies for the Pars at East End Park and are proud of their connection with Dunfermline. Managing Director Andre Sarafilovic explains:

“Stephens have been part of the fabric of Dunfermline for over 140 years now. Looking back through the photographs of the company taking part in events like the annual parade of floats in the Civic Week Parades and supplying lunches to generations of schoolchildren in the Gala has emphasised to me the role that Stephens have played in Dunfermline through those years. Stephens are delighted to be part of the community and to support the new ‘Old Dunfermline’ website.”

On the occasion of their one hundredth birthday in 1973 a Centenary Luncheon for all staff, customers, friends and local and trade Dignitaries was held in the Glen Pavilion in Pittencrieff Park. In addition to speeches by the then Provost Les Wood and attendance by Peter Stephen, son of the original founder, there was also a congratulatory letter from the Earl of Elgin who wrote:

“Any family which has managed to keep a continuous bun in the oven for a hundred years and more deserves a salute!”